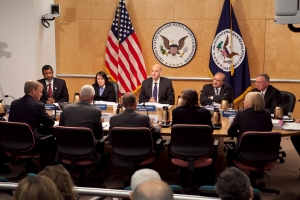 The NRC Commissioners today were briefed by the near-term task force that had been appointed to look at immediate lessons learned from the Japan nuclear emergency in March. Upfront, the task force told the Commissioners:

• A similar sequence of events in the U.S. is unlikely;

• Existing emergency measures could reduce the likelihood of core damage and release of radioactive materials; and

• There is no imminent risk from continued operation and licensing activities.

But the task force is recommending a variety of changes to NRC procedures, regulations and policies, including a review of the agency’s “defense-in-depth” philosophy, which refers to multiple layers of protection within and around a nuclear power facility. The task force specifically cited the need for a focus on preparing for natural disasters and long-term loss of all A/C electricity at a plant.

The recommendations need Commission approval to move forward. Chairman Jaczko urged his fellow commissioners to review and act up on the report’s recommendations within the same 90-day time frame given the task force to generate the report.

The task force has scheduled a follow-up meeting on July 28th to discuss the report’s findings and recommendations with the public, the industry and other interested groups. More information will be available on that meeting here: http://www.nrc.gov/public-involve/public-meetings/index.cfm.

A video archive of today’s meeting is available here: http://video.nrc.gov// .

The slides from today’s meeting are here: http://www.nrc.gov/reading-rm/doc-collections/commission/tr/2011/ .