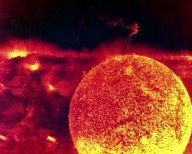 The NRC requires U.S. nuclear power plants to be able to shut down safely in the face of many extreme events – tornados, hurricanes and earthquakes. But the NRC also takes into account far more unusual events, like solar flares and electromagnetic pulse (EMP) caused by a certain type of nuclear weapon. Both can affect generators, transformers and other parts of the electric grid – which in turn could affect nuclear power plants.

The NRC has been examining these issues for more than 30 years, starting in the late 1970s when the agency studied how EMP could affect nuclear power plant safe-shutdown systems. In February 1983 the NRC issued the study’s conclusion: nuclear power plants’ safety systems can do their jobs after an EMP event. The agency revisited the issue in 2007 to account for the increasing use of digital computer systems in nuclear plants, which potentially could be more susceptible to EMP. The agency continued to conclude as recently as two years ago that nuclear power plants can safely shut down following an EMP event.

The NRC has also examined potential “solar storms” and their potential to damage the electric grid. A strong geomagnetic storm on March 13, 1989, for example, severely disrupted electrical power equipment in Canada, Scandinavia, and the United States. After studying the event the NRC issued an Information Notice in June 1990, to ensure nuclear power plants understood how severe solar activity could affect transmission systems and other components of the power grid. Additional research in 2010 analyzed and compared solar or geomagnetically-induced current events to those of the EMP events previously analyzed. This work led to the same conclusion as the EMP studies – U.S. nuclear power plants can safely shut down if a solar storm disrupts the grid.

The edge of the NRC’s authority lies in a nuclear power plant’s electric switchyard, where our rules mesh with those of the Federal Energy Regulatory Commission, which oversees the nation’s electric grids. Another body, the North American Electric Reliability Corporation (NERC) develops and enforces grid reliability standards. The NRC works closely with FERC and NERC on grid reliability issues, including the effects of solar or geomagnetic storms and EMP.

Earlier this year a citizen petitioned the NRC to revisit the issue of grid disruption, this time focusing on the spent fuel pools at U.S. nuclear power plants. The petition calls for a new rule that would require nuclear power plant spent fuel pools to have emergency systems capable of functioning for two years in the absence of an operating electric grid. The NRC is currently analyzing dozens of public comments on the petition, and the agency expects to issue a decision on the petition in the middle of next year.

If you’re interested in more details, look at the letter the NRC sent Congress last month.