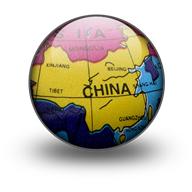 Thanks to the NRC’s agreement with China’s nuclear agency to exchange construction knowledge, I traveled there last summer to observe ongoing work on two Westinghouse AP1000 nuclear units. In July, I arrived in Shanghai, a sprawling, modern city full of skyscrapers and familiar places like Starbucks and Burger Kings.

I traveled southeast to the Sanmen nuclear power plant Units 1 & 2 on a high-speed train, a journey that took four hours.

The Sanmen site was built to support current construction as well as future operations. There are apartments, a convenience store, banks, restaurants, a police station, tourist center, offices, and an excellent hotel, where I stayed. It is also the site of a tidal bay where dozens of people worked in the mud digging for clams and snails twice daily during low tide. During the months of July and August, temperatures typically ranged from 97 to 104°F with 90 percent humidity.

The joint project with China will better equip NRC construction inspectors like me as we examine the quality of work done on reactors anticipated to be built in our country. The areas we will have to examine range from concrete quality to whether welding is done properly. In the U.S., we completed construction inspections in the 90s at one existing reactor that was refurbished, and are continuing inspections at another unfinished reactor. However, it has been decades since we’ve had to inspect the construction of an entirely new reactor in the United States. We currently have two inspectors at the Vogtle nuclear plant site in Georgia and one inspector at the Summer site in South Carolina where pre-construction activities are taking place. The Commission is expected to reach a decision soon on whether new advanced reactors can be built at those sites.

While in China, I was able to see emergency planning at work as more than 200,000 people were evacuated in advance of a typhoon. And, as a sidelight, the trip also offered a look at Chinese culture and cuisine. The menus are varied and the food delightful, though I did lose 20 pounds.

After a few weeks in Shanghai, I met Region II Administrator Victor McCree and Jimi Yerokun, deputy director of the Division of Construction Inspection in the NRC’s Atlanta office, for a meeting in the Eastern China Regional Office. We visited the Shanghai Electric Nuclear Power Equipment Co., manufacturer of nuclear reactor vessels, steam generators, pressurizers, and core makeup tanks where many of the components are fabricated. We also returned to the Sanmen site for a meeting with the China National Nuclear Corporation and a final tour before returning home in September.

The construction is far from complete, but so far we can say that the containment vessels of both units are being assembled, welded, heat treated and inspected in a manner meeting all the Westinghouse specifications. The trip allowed me to see China and learn about the culture, but most importantly, we are learning lessons that will be valuable when American utilities begin to build Westinghouse AP1000 nuclear plants here at home.

7 thoughts on “An American construction inspector in China”