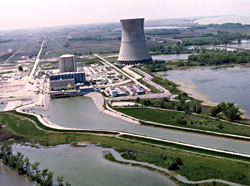 Do the cracks discovered in the shield building at the Davis-Besse Nuclear Station compromise its ability to stand up to tornadoes and earthquakes?

Can the shield building still protect the reactor vessel from being hit by heavy outside objects?

The NRC concluded on December 3 that the shield building can fulfill these safety functions. However, the agency is making sure the plant takes necessary actions to ensure the continued safety of the shield building and issued a Confirmatory Action Letter (CAL) documenting these actions as commitments to the NRC.

The NRC responded to the discovery of the cracks in the shield building immediately by dispatching a structural inspector to the site and putting together a team of about ten engineers to provide a thorough and independent review of the plant’s actions to characterize the cracks and analyze their implications for shield building safety.

NRC inspectors worked tirelessly to make sure they had a thorough understanding of the condition of the shield building. This intense review process allowed the agency to reach the conclusion that the structure was strong enough to fulfill its safety function. This review involved:

• monitoring the licensee’s activities at the plant as they were identifying the extent and nature of the cracks;

• examining the licensee’s methodology for assessing the impact of the cracks on the shield building;

• making sure the samples taken from the building were sufficient to indicate the extent and the severity of the cracks in the building as a whole;

• reviewing the calculations and the assumptions on the shield building’s ability to withstand stresses during normal operation and during events such as tornadoes and earthquakes;

• continuing to ask questions about the specifics of the licensee’s calculations; challenging their assumptions; requesting additional information; and

• making sure the calculations were sufficiently conservative until NRC inspectors had reasonable assurance that the building had sufficient structural strength to fulfill its safety function.

The NRC has two outstanding issues that don’t have an immediate impact on the shield building’s ability to fulfill its safety function but need to be addressed going forward. One is understanding what caused the cracks; the other is determining if the shield building still meets the original design specifications in the plant’s license.

The first issue will be addressed through the CAL, which commits the plant to submitting a “root cause evaluation” to the NRC by February 28, 2012. In the meantime, the CAL also commits the plant to monitoring the extent and the size of the cracks short-term to make sure the company’s safety conclusions remain valid. The plant had committed to develop a long-term monitoring program after the causes of the cracking are better understood.

If the company fails to meet the commitments in the CAL the agency can take further regulatory action to ensure the safety of the plant and the public.

The NRC will continue to inspect the second issue to determine if the cracks affected the design margins of the shield building in the plant’s license. The agency will document the results of this review in a future inspection report, which will be made public, and determine the need for any further regulatory action.

4 thoughts on “How did the NRC decide the shield building at Davis-Besse is safe?”