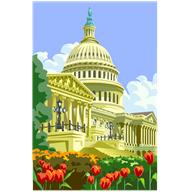 Last August, shortly after a magnitude 5.8 earthquake in Virginia triggered the shutdown of two reactors at the North Anna nuclear station and rattled 12 other nuclear power plants across the eastern U.S., NRC’s phones began ringing. It had only been five months since a massive earthquake and tsunami pummeled Japan’s eastern coast and severely damaged the Fukushima nuclear station. Questions streamed in about the structural safety of U.S. nuclear plants and their ability to withstand high-intensity seismic activity.

Many residents living near nuclear power plants called their congressional representative, who turned to NRC’s Office of Congressional Affairs (OCA) for answers. Over the next several days and weeks, OCA responded to questions about reactor designs, safety equipment, loss of offsite electrical power, and the integrity of dry cask storage pads.

In the aftermath of an international or domestic event like the Japan and Virginia earthquakes, OCA can receive a spate of inquiries. But throughout the year, members of Congress seek updates on nuclear facilities in their districts and various other issues under NRC’s jurisdiction, such as information on nuclear medicine and effects of radiation exposure. OCA acts as the liaison between the agency and Congress, providing information on events and keeping members current on rulemakings and program and policy changes.

OCA works closely with the House and Senate authorizing, appropriations, and oversight committees of NRC. This time of year gets busy, when the president outlines his budget priorities and Congress digs into the budget process to develop its own version of funding levels for federal agencies. The Administration’s budget request is set to be released on February 13, and congressional budget hearings are expected to follow. OCA will assist with the preparation of NRC witnesses and testimony for hearings, as well as responses to follow-up questions from Congress. Other activities include coordinating requests for briefings and reviewing correspondence with members of Congress.

NRC testimony, congressional reports and correspondence to Congress are posted on NRC’s website.