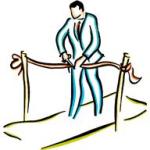 As the Director of Protocol at the NRC, my days are always varied, filled with details and consistently focused on making sure that the agency is represented in the most positive and appropriate way possible.

Have you ever watched an event, a ceremony, a half-time show, maybe the presidential inauguration or State of the Union Address and wondered “Who puts that together?” or “Oh no, that doesn’t look right.” Well, the people behind the scenes planning, coordinating, and putting all the final touches together are event planners, or—in the case of the NRC—protocol officers.

Protocol Specialist Susan Wittick and I make up the Protocol team at the NRC. We are sometimes responsible for an entire event, but more typically we work with designated office points of contact or organizing committees to make sure all aspects of event planning and the unforeseen have been considered for events where the Chairman or Commission have an active role. The involvement of the Office of Protocol in the beginning of an event helps ensure smooth coordination, and attention to logistics and details.

When protocol activities are done properly, they are not noticeable – everyone and everything is in place, works smoothly and represents the host or organization well. However, major gaffes can make headlines – especially when unauthorized people “crash the party”– but even smaller issues can be embarrassing.

During a recent newscast, I saw a good example of why attention to detail is so important. The segment showed a ribbon-cutting ceremony where the large, ceremonial scissors being used didn’t actually cut! As a protocol officer, I couldn’t help thinking, how could this have happened? Why weren’t the scissors tested prior to the event, especially if it was being covered by reporters? These are the sorts of details that protocol officers are trained to address. We also help make sure proper orders of precedence are used during special events, that flags are used and positioned correctly, and that proper courtesies, dietary restrictions and gifts are part of our hosting of international delegations.

At the NRC, we keep our guest lists accurate and our scissors sharp! It is important that the agency be properly represented. A first impression is lasting!