Planning the next public meeting in Southern California for the San Onofre Nuclear Generating Station has presented a challenge for the NRC.

Our last public meeting at the San Juan Capistrano Community Center on June 18 drew more than 500 people, not all of whom could be accommodated in this venue. At that meeting, members of the NRC’s Augmented Inspection Team presented the preliminary findings of a comprehensive inspection conducted after several steam generator tubes failed pressure testing in February.

Technically, that was what the NRC calls a Category 1 meeting, held with Southern California Edison Co. After the business portion of the meeting was completed, NRC staff and Edison officials responded to members of the public who were given an opportunity to ask questions about the inspection and related steam generator issues.

Interest in the agency’s response to the steam generator problems at San Onofre is extremely high. Immediately following the June 18 meeting, planning began for another meeting that would allow members of the public to meet directly with NRC staff to voice their concerns on a broader range of topics.

Another meeting was planned for August 8, with a similar venue as the June 18 meeting. As the final contracts were being signed, a large response from many members of the public asked for a much larger venue, capable of seating more than 1,000 attendees, with live web streaming for remote viewing and participation. In order to accommodate this we cancelled the August 8 meeting and began a search for a larger facility. 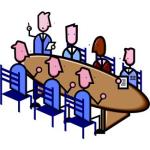 Anticipating a larger turnout, we also considered what kind of format would work best for such a large group. Instead of holding a Category 3 Town Hall meeting, where NRC staff would meet directly with the public, Region IV Administrator Elmo Collins proposed a meeting format designed to create an opportunity to hear from a wide range of perspectives. The meeting will include a facilitated roundtable discussion on topics of significant public interest.

We’ve chosen two experienced facilitators to ensure that the meeting is both informative and responsive to the public’s interests. The format we chose will provide community members with an opportunity to get answers to many of their questions and air their concerns. This format was selected in consultation with San Clemente Green and the San Clemente-based Residents Organized for a Safe Environment,

For the past three months, Region IV staff has been trying to find a venue large enough to accommodate such a potentially large group. After much effort we have been able to find a facility that meets all of our needs: The St. Regis Monarch Beach Resort in Dana Point, Calif. The two-part meeting on October 9 will run from 6 to 9:30 p.m. The first part of the meeting will be a roundtable discussion with observation by members of the public, followed by a question and answer session between the NRC staff and the public. The hotel does charge a nominal parking fee, so attendees are encouraged to car pool.

Details about the meeting and how to see it via webstreaming will soon be available on our Public Meeting page.

Victor Dricks
Region IV Senior Public Affairs
Update: Since announcing our Oct. 9 meeting in San Clemente for the San Onofre Nuclear Generating Station we have received many inquiries about our choice of venue and the $10 parking fee people will have to pay to attend. We wanted to provide some additional details about our planning process.In order to be responsive to the feedback we received from stakeholders, we identified seven different hotels within a 25 miles radius of San Clemente that had capacity to host a meeting for up to 1,000 people. Each of the seven also is capable of supporting webcasting, which we plan to arrange through a contractor. Although the Capo Beach Calvary Church in Dana Point is large enough to support 1,000 people and has free parking, we felt this might not be an appropriate venue for a meeting hosted by a federal government agency. We were pursuing venues capable of supporting up to 1,000 attendees due to numerous requests from the public to accommodate a larger crowd.

Only two of the seven hotels we looked at were interested in hosting the NRC meeting, the St. Regis, and a hotel in Newport Beach. The hotel in Newport Beach was nearly 25 miles away and we felt that distance would be inconvenient for attendees. Based on proximity to San Onofre, webcasting abilities, audience capacity and interest in holding an NRC meeting, we chose the St. Regis. The hotel normally charges $24 for parking and federal law precludes the NRC from paying for parking. We were able to negotiate a reduced rate of $10 for meeting attendees. Note: The hotel now says it will charge $5 for “self parking.”

We understand the parking fee may dissuade some people from attending and apologize for this inconvenience. The selection of this venue was the only way to satisfy this meeting’s specific requirements. The venue we chose represents our intention to provide the maximum number of people an opportunity to hear from and interact with NRC and Edison officials, as well as elected officials and stakeholders. This venue will accommodate those who are able to directly participate, and provide those who cannot with an opportunity to view the event remotely.

The NRC and its Agreement State partners enforce multi-layered security requirements for licensees that possess radioactive materials (also called “sources”) that would be most dangerous if used in a dirty bomb – also commonly known as a radiological dispersal device or RDD. These requirements include:

These requirements are performance-based rather than prescriptive, meaning the rules set objectives to be met but do not specify precisely how to achieve them. That’s because licensees using these materials are quite diverse – from hospitals to small health clinics or doctors’ offices, universities, large factories, and small businesses. There is no one-size-fits-all approach to securing these materials.

The NRC and its Agreement States imposed these requirements beginning in 2005 with a series of Orders. The requirements, along with some new provisions based on experience enforcing the Orders, are now codified in NRC regulations in 10 CFR Part 37, approved in March of this year, to take effect next year. Part 37 will require licensee personnel with security responsibilities to have recurring security training.

The NRC believes these security requirements provide adequate protection against the theft and misuse of radioactive materials. But we don’t rest there – we also cooperate with a program initiated by the Department of Energy’s National Nuclear Security Administration (NNSA) that offers voluntary physical security enhancements to help licensees meet NRC requirements with no start-up costs.

The NNSA also provides valuable training to police departments and others who must respond to security events involving radioactive materials. In addition to the facility security improvements, the NNSA works with radiological device manufacturers to harden their products against tampering.

These requirements are the foundation of the NRC’s effort to ensure security of radioactive materials so they can continue to be used to benefit society. But they are not the agency’s only efforts. In future blog posts, we’ll describe the National Source Tracking System, now in its third year of operation, and two other systems now in development: Web-Based Licensing and the Licensee Verification System.