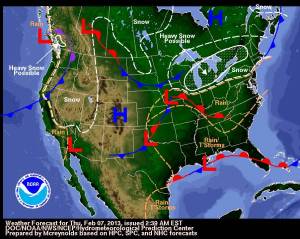 New England states and other parts of the Northeast are battening down the hatches in anticipation of a winter storm dubbed “Nemo” by the Weather Channel.

Unlike “Finding Nemo,” the 2003 hit movie from Disney featuring a clown fish dad roaming the seas in search of his wayward son, those in the storm’s path won’t have to look far to see its impacts. Indeed, forecasts are calling for blizzard conditions and upwards of two feet of snow in the Boston area.

As with other significant storms, nuclear power plants that could be affected will be required to make preparations. These are actions such as ensuring that fuel oil tanks are adequately filled; that there are no materials on plant grounds that could become airborne missiles amid high winds; and that water-tight doors and other openings are properly closed in the event flooding becomes an issue.

NRC inspectors stationed at all operating plants on a full-time basis will likewise be busy, as they independently verify the facilities – particularly the Pilgrim plant in Massachusetts and the Seabrook plant in New Hampshire — are positioned for whatever wicked weather comes their way. To help guide those evaluations, the inspectors will follow a procedure and checklist focused on adverse weather protection.

Once the storm arrives, plant operators have plans that guide their responses. For instance, if sustained wind speeds exceed a certain level, a plant would have to shut down. Also, if flooding were to be greater than pre-determined thresholds, an emergency declaration would have to be made and a shutdown may be necessary.

During Superstorm Sandy last October, three nuclear power plants ended up shutting down for reasons that included high water intake levels and electrical grid disturbances, but all did so safely and effectively. As always, the work that takes place before the storm arrives is an essential part of ensuring any storm-related problems can be handled in a prompt, safe manner.