When the temperatures plunge into Arctic territory, there are few parts of the infrastructure not impacted in one way or another. Pipes can freeze, roads and bridges can quickly ice over and car batteries can go dormant.

Now, with what meteorologists are calling a “polar vortex” flooding much of the country with a blast of frigid air, precautions are being taken to guard against potential effects. Count U.S. nuclear power plants among those facilities gearing up for the 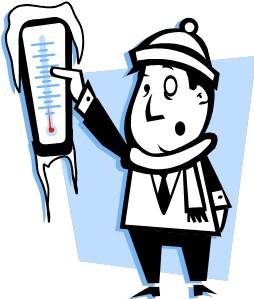 As of Monday afternoon, no plants were reporting any problems of note related to the frigid extremes, but ongoing checks will be in order to ensure that remains the case.

The NRC’s regional offices in the Midwest and Northeast are keeping an eye on plant owners’ responses to the unusually low temperatures. Plants in the affected areas have entered off-normal procedures that entail minimizing regular surveillance activities and increasing the frequency of checks and walkdowns (visual evaluations) of equipment that could be impacted by the temperatures.

NRC Resident Inspectors, who are assigned to specific sites, will continue to monitor the situation. The inspectors use an “Adverse Weather Protection” inspection procedure to guide their assessments of whether plants are ready for extreme temperatures, including the bitter cold. Those reviews are typically done at the start of the season.

“As applicable, verify cold weather protection features, such as heat tracing, space heaters, and weatherized enclosures are monitored sufficiently to ensure they support operability of the system, structure or component (SSC) they protect,” the procedure states in part.

It also instructs inspectors to perform walkdowns to verify the physical condition of weather-protection features.

The NRC has long recognized the need for nuclear plant owners to be on guard for extreme cold-related issues. Along those lines, the agency in January 1998 issued an Information Notice on “Nuclear Power Plant Cold Weather Problems and Protective Measures.” Although such notices do not require a specific action or written response, they do serve to make plant owners aware of possible concerns.

For example, the Information Notice discussed an ice plug that formed on Jan. 8, 1996, at the Millstone Unit 2 nuclear power plant in a service water strainer backwash drain line. Service water refers to water taken from a nearby source of water — be it the ocean, a lake or river — used for cooling purposes in the plant and then returned.

To prevent a recurrence of the problem, the plant owner changed an operating procedure to ensure closer monitoring when service water intake structure temperatures drop below 40 degrees Fahrenheit and to make use of portable heaters or go to manual operation of the strainers.

Nuclear power plants are designed to withstand weather extremes. Nevertheless, NRC inspectors will be on hand to keep a close watch on plant conditions during the “vortex” and beyond.

Update: Nebraska was not exempt from freezing temperatures. On Jan. 9, around 9 a.m. central time, operators shut down Fort Calhoun Station to repair one of six sluice gates after a plant worker discovered ice forming preventing it from closing. The gates, located at the intake structure, control the flow of water from the Missouri river into the plant. All six gates must be functional for the plant to be allowed to operate as part of the flood protection strategy. On Friday, Jan. 10, workers corrected the problem.

Early Sunday morning, during plant start up, operators had to manually shut down the reactor after a control rod would not move as required to due a faulty motor. Sunday, workers repaired the motor and OPPD is currently restarting the plant.