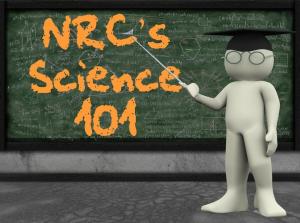 In earlier Science 101 posts, we talked about what makes up atoms, chemicals, matter and ionizing radiation. In this post, we will look at the different kinds of radiation.

There are four major types of radiation: alpha, beta, neutrons, and electromagnetic waves such as gamma rays. They differ in mass, energy and how deeply they penetrate people and objects.

The first is an alpha particle. These particles consist of two protons and two neutrons and are the heaviest type of radiation particle. Many of the naturally occurring radioactive materials in the earth, like uranium and thorium, emit alpha particles. An example most people are familiar with is the radon in our homes.

The second kind of radiation is a beta particle. It’s an electron that is not attached to an atom (see previous blog post). It has a small mass and a negative charge. Tritium, which is produced by cosmic radiation in the atmosphere and exists all around us, emits beta radiation. Carbon-14, used in carbon-dating of fossils and other artifacts, also emits beta particles. Carbon-dating simply makes use of the fact that carbon-14 is radioactive. If you measure the beta particles, it tells you how much carbon-14 is left in the fossil, which allows you to calculate how long ago the organism was alive.

The third is a neutron. This is a particle that doesn’t have any charge and is present in the nucleus of an atom. Neutrons are commonly seen when uranium atoms split, or fission, in a nuclear reactor. If it wasn’t for the neutrons, you wouldn’t be able to sustain the nuclear reaction used to generate power.

The last kind of radiation is electromagnetic radiation, like X-rays and gamma rays. They are probably the most familiar type of radiation because they are used widely in medical treatments. These rays are like sunlight, except they have more energy. Unlike the other kinds of radiation, there is no mass or charge. The amount of energy can range from very low, like in dental x-rays, to the very high levels seen in irradiators used to sterilize medical equipment. 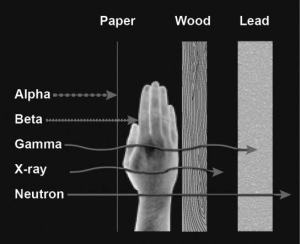 As mentioned, these different kinds of radiation travel different distances and have different abilities to penetrate, depending on their mass and their energy. The figure (right) shows the differences.

Neutrons, because they don’t have any charge, don’t interact with materials very well and will go a very long way. The only way to stop them is with large quantities of water or other materials made of very light atoms.

On the other hand, an alpha particle, because it’s very heavy and has a very large charge, doesn’t go very far at all. This means an alpha particle can’t even get through a sheet of paper. An alpha particle outside your body won’t even penetrate the surface of your skin. But, if you inhale or ingest material that emits alpha particles, sensitive tissue like the lungs can be exposed. This is why high levels of radon are considered a problem in your home. The ability to stop alpha particles so easily is useful in smoke detectors, because a little smoke in the chamber is enough to stop the alpha particle and trigger the alarm.

Beta particles go a little farther than alpha particles. You could use a relatively small amount of shielding to stop them. They can get into your body but can’t go all the way through. To be useful in medical imaging, beta particles must be released by a material that is injected into the body. They can also be very useful in cancer therapy if you can put the radioactive material in a tumor.

Gamma rays and x-rays can penetrate through the body. This is why they are useful in medicine—to show whether bones are broken or where there is tooth decay, or to locate a tumor. Shielding with dense materials like concrete and lead is used to avoid exposing sensitive internal organs or the people who may be working with this type of radiation. For example, the technician who does my dental x-rays puts a lead apron over me before taking the picture. That apron stops the x-rays from getting to the rest of my body. The technician stands behind the wall, which usually has some lead in it, to protect him or herself.

Radiation is all around us, but that is not a reason to be afraid. Different types of radiation behave differently, and some forms can be very useful. For more information on radiation, please see our website.