In earlier Science 101 posts, we talked about what makes up atoms, chemicals and matter. In this post, we will look at a specific chemical element — plutonium.

Plutonium is a radioactive, metallic element with the atomic number 94. It was discovered in 1940 by scientists studying the process of splitting atoms. Plutonium is created in a nuclear reactor when uranium atoms, specifically uranium-238, absorb neutrons. Nearly all plutonium is man-made.

Plutonium predominantly emits alpha particles—a type of radiation that does not penetrate and has a short range. It also emits neutrons, beta particles and gamma rays. It is considered toxic, in part, because if it were to be inhaled it could deposit in lungs and eventually cause damage to the tissue.

Plutonium has five “common” isotopes, Pu-238, Pu-239, Pu-240, Pu-241, and Pu-242. All of the more common isotopes of plutonium are “fissionable”—which means the atom’s nucleus can easily split apart if it is struck by a neutron.

The various isotopes of plutonium have been used in a number of applications. Plutonium-239 contains the highest quantities of fissile material, and is notably one of the primary fuels used in nuclear weapons. Plutonium-238 has more benign applications and has been used to power batteries for some heart pacemakers, as well as provide a long-lived heat source to power NASA space missions. Like uranium, plutonium can also be used to fuel nuclear power plants, as is done in a few countries. Currently, the U.S. does not use plutonium fuel in its power reactors. 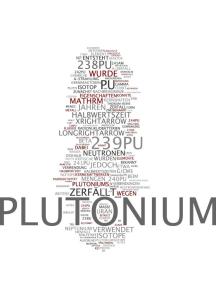 Nuclear reactors that produce commercial power in the United States today create plutonium through the irradiation of uranium fuel. Some of the plutonium itself fissions—part of the chain reaction of splitting atoms that is the basis of nuclear power. Any plutonium that does not fission stays in the spent fuel. Spent nuclear fuel from U.S. reactors contains about one percent plutonium by weight.

The different isotopes have different “half-lives” – the time it takes for one-half of a radioactive substance to decay. Pu-239 has a half-life of 24,100 years and Pu-241’s half-life is 14.4 years. Substances with shorter half-lives decay more quickly than those with longer half-lives, so they emit more energetic radioactivity.

Many metric tons of plutonium are currently contained in spent nuclear fuel around the world. To be usable, plutonium needs to be separated from the other products in spent fuel through a method called reprocessing. Reprocessing separates plutonium from uranium and fission products through chemical means. Once separated, plutonium oxide can be used as fuel for nuclear power reactors by mixing it with uranium oxide to produce mixed oxide or MOX fuel. The U.S. government has historically discouraged the use of this technology for national security and environmental reasons.

The NRC is currently overseeing construction of a facility in South Carolina to make MOX fuel using plutonium removed from U.S. nuclear weapons declared excess to military needs, as part of a Department of Energy program to convert it into a proliferation-resistant form that would be difficult to convert again for use in nuclear weapons.

16 thoughts on “NRC Science 101: What is Plutonium? UPDATED”