Chalk River Unidentified Deposits (CRUD). The nuclear industry loves its acronyms, and the myth behind CRUD—a term for corrosion particles that become radioactive—is almost as fabled as Safety Control Rod Axe Man (SCRAM). But in reality, crud, like scram, is not an acronym at all, but popular slang appropriated by Manhattan Project personnel.

The idea that crud was an acronym came from a 1959 article by Commander E.E. Kintner. In 1953, Kintner headed the Advanced Design Group under Hyman Rickover developing the Mark I prototype reactor for the first nuclear powered submarine, the Nautilus. To verify that the reactor’s fuel elements would not corrode, Kintner recalled, samples were placed in a research reactor located at Chalk River, Canada. After several months of irradiation, the fuel elements were covered in deposits—Chalk River Unidentified Deposits. This was worrisome since the deposits might block the flow of coolant around the fuel causing them to overheat and melt. While the problem was resolved by adjusting water chemistry, “CRUD” lived on as an acronym for radioactive deposits.

Kintner likely did not know that by 1953 the word crud had already been in use for nearly a decade at Atomic Energy Commission facilities. The word appeared in a technical manual as early as May 1944 at in the Hanford Engineering Works in Washington State. The manual described the use of chemical treatments “to seep insoluble ‘crud’ and mud from the solution.” By 1947, “crud” was a common enough in the AEC that reports from Hanford and Oak Ridge no longer used quotation marks to describe the “crud deposition problem.”

Thus, CRUD is really an example of a backronym — where words are identified to fit the letters of an existing word.

So, why was “crud” used to describe radioactive deposits in the first place? Crud was a common word well before World War II that likely derives from the Welsh cryd, meaning disease or plague. By the early 1930s, crud became slang for unpalatable food, filth, a sloppily dressed man or an illness, as in, “I’ve got the crud.” By World War II, soldiers called any unknown illness “the crud,” and a comic book of the era featured a Corporal Crud as one of its characters.

It seems likely that the negative connotations of crud made it a fitting descriptor for contamination associated with radioactive deposits. The etymology of scram and crud, then, reveals how Manhattan Project workers tried to make sense of the uncommon new world of the atom through common language. 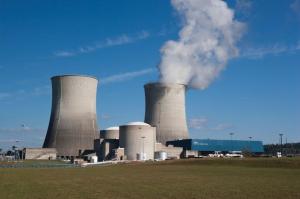 Watts Bar Nuclear Plant near Spring City, Tenn. Our meeting tonight will discuss where TVA stands in its effort to get an operating license for Unit 2.

If you can’t make it in person, we’re offering a teleconference and Web-based access to the meeting presentation. You can get the phone and webinar details from me or my NRC co-worker Christopher Even. For those who can attend, we’ll be available to answer questions and discuss issues with local residents and interested members of the public.

During the meeting we’ll lay out the inspections and licensing activities the NRC must complete before we could decide whether Watts Bar 2 qualifies for an operating license. Some of our senior managers will explain how we’ve reached this point and what we need to see before we could conclude that the plant is safe to operate.

While we’re still reviewing a few issues, all the information we’ve seen so far indicates TVA is on track to meet the safety and security requirements for a reactor operating license.

If we issue Watts Bar Unit 2 an operating license, TVA would still have to load fuel and begin a series of tests during plant startup and a gradual increase in power output. The NRC would continue inspecting and overseeing the completion of these startup activities prior to Unit 2 generating full power and starting commercial operation. If licensed, Unit 2 would be the first plant to begin commercially operating in the U.S. since Watts Bar Unit 1 started in 1996. For more information please visit the NRC public webpage on Watts Bar Unit 2.