An ongoing lesson from 2011’s Fukushima Dai-ichi accident involves U.S. reactors better understanding their earthquake hazard. Reactor owners in the Western parts of the country have had to assemble a particularly complex jigsaw puzzle of seismic information. They’ve just sent the NRC their detailed re-analysis. 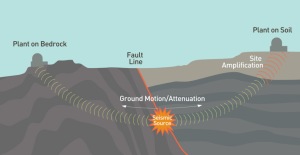 The graphic shows the three pieces of information U.S. reactor owners have used to analyze their specific hazard:

Central and Eastern U.S. reactors benefitted from region-wide updated earthquake source information and a model of quake energy transmission for the first two pieces. Plants west of the Rockies, however, had to deal with the West’s more active and interconnected faults.

Columbia, Diablo Canyon Part I and Part II and Palo Verde used the Senior Seismic Hazard Analysis Committee (SSHAC) approach to develop site-specific source models and ground-motion models. This group of independent seismic experts develops guidance on major seismic studies such as this. The group has met several times the past few years to ensure the Western plants properly conduct and document their seismic activities.

The NRC carefully considers SSHAC comments and recommendations before the agency comes to its own conclusions on seismic issues. We’re currently evaluating the Western plants’ reports and will issue our short-term screening and prioritization review later this spring.

As for the Central and Eastern U.S. plants’ March 2014 submittals, we screened them to determine what other actions the plants might have to take. Plants that have more to do were grouped into three priority groups with staggered deadlines. Many of those plants submitted additional analyses in December 2014, and the NRC continues reviewing both that information and the March 2014 submittals.

13 thoughts on “Western U.S. Reactors are Completing Their Seismic Picture”