Today’s Information Digest is filled with infographics and photos, depicting the work of the NRC and its licensees. Anyone who wants to know anything about nuclear security, materials, waste and reactors can open up the Information Digest – in print or online – and find the answer. But, the book hasn’t always been this way. Over time, the Information Digest has evolved to fit the changing needs of the public, the media, the industry and the NRC. 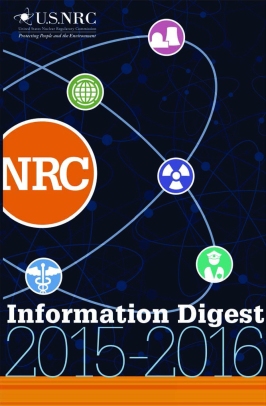 Our journey begins in January 1982 when the Office of the Controller issued the first quarterly Summary Information. Most people knew it as the Brown Book, aptly named for the document’s cover. Unlike the current Information Digest, the Brown Book had white pages covered in black text with no photos or diagrams.

The purpose of the Brown Book was to have a consistent source of industry data for budget justification. NRC staff needed a reliable source of information to which they could quickly refer when needed. There were no descriptions of processes or technology in the Brown Book. It was simply an aggregation of graphs, charts and data.

Despite the differences, there are quite a few similarities between the old and new versions. Like the current Information Digest, the Brown Book had a U.S. Nuclear Regulatory Commission Organization Chart, a map of the Agreement States and charts of operating reactors.

The Brown Book evolved into the Information Digest in the late ‘80s. It was still the same size, but blue instead of brown.  This new version was divided into two parts: an overview of the NRC and industry data. NRC staff began carrying copies of the book when briefing Congress and the public or when recruiting employees. Smaller, “pocket editions” of the Information Digest were also produced.

Karen Olive, (now retired), remembers working on the Digest during her time in the Office of the Chief Financial Officer. There was a much less formal process of collecting information. She would call around the agency, asking employees if they had any information that needed to be included. Soon, people were contacting her with their own suggestions.

The Information Digest continued expanding its audience during the ‘90s. Instead of being solely focused on data, the Digest became an educational tool for the public. The graphs and charts were now accompanied by text. A glossary was also added to explain terms used in the nuclear industry. Although the book shrank from 11 x 8½in. to 5 x 3in., it grew thicker as more information was added.

The 27th edition of the Information Digest, which came out today, is much like its predecessors – with changes too.  Visual changes include an indigo cover with icons and a new layout. The online Digest is also more user-friendly. Maps are now more visible when printing in black and white, and you can also upload the PDF version to your smartphone.

The Info Digest will continue to evolve as publishing practices and audience preferences change. But no matter what, the publication will remain a quality source of information about the NRC.

One thought on “Something Old, Something New – The Information Digest”