As a new year kicks into gear, the NRC will be stepping up its oversight activities at the Pilgrim nuclear power plant. The start of a formalized review process is in line with our pledge last year to apply additional scrutiny amid performance concerns. 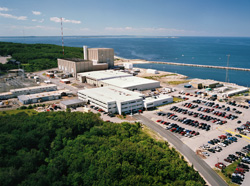 In September, the agency announced the finalization of an inspection finding for the Plymouth, Mass., facility. Classified as “White,” or of low to moderate safety significance, the finding stemmed from issues involving the plant’s safety relief valves.

Based on that enforcement action, in combination with two earlier “White” findings received by the plant, Pilgrim moved to Column 4, of the agency’s Action Matrix, which dictates the agency’s level of oversight at plants.

We said at the time that the plant would be subjected to numerous hours of inspections above the normal level as a consequence of the change. While all of the specific details of the increased oversight are not yet in place, we’ve notified the plant’s owner, Entergy, that the inspection process would entail three phases.

Phase “A” of the 95003 process – that number refers to an inspection procedure for plants in Column 4 — is scheduled to occur this week. It will involve a review of various aspects of the plant’s corrective action program, with a specific focus on older items that were in need of attention. A plant’s corrective action program serves the vital purpose of ensuring problems are addressed in a timely manner, and we want to ensure items entered into it were, in fact, appropriately dispositioned.

The objective will be to determine if continued operation is acceptable and whether additional regulatory actions are required to arrest declining performance.

Current plans call for Phase “B” to be carried out during the week of April 4. During that phase, the NRC will evaluate the overall performance of the plant’s corrective action program since a problem identification and resolution inspection was completed there last August. In other words, this phase will be keyed to more recent corrective actions, particularly since the plant entered Column 4.

Each of those phases will be performed by three inspectors from the NRC’s Region I Office in King of Prussia, Pa.

Based on the results of those first two phases, the NRC will develop a plan for, and map out the scope of, Phase “C.” It will cover items not inspected during the first two phases and include an assessment of the plant’s safety culture and such areas as human performance, equipment reliability and procedure quality.

What’s more, the inspectors will review the work done as part of the plant’s performance improvement plan. That plan is due to be submitted to the NRC sometime in mid-2016.

This final phase will be the most comprehensive of the three and will seek to inform the agency’s decision on whether sufficient progress has been made to end the agency’s increased oversight of the facility. The timeframe for that review will be available later this year.

Another step will be the NRC’s issuance of a Confirmatory Action Letter to Pilgrim that will spell out actions needed for the plant to satisfy any remaining safety concerns. The agency will subsequently inspect the company’s follow-through on those commitments.

It should be noted that the NRC has not waited until now to increase its oversight at Pilgrim following the decision last September. The agency has already performed focused inspections at the plant, in such areas as operator performance, preparations for adverse weather, and problem identification and resolution.

In addition, the NRC has added a third Resident Inspector – there are normally two — assigned to Pilgrim since November.

Even though Entergy has announced that Pilgrim will be shutting down no later than June 2019, the NRC remains committed to our safety oversight, with these inspections helping to inform our determinations.

We also remain committed to communicating to the public regarding our oversight activities at Pilgrim as they advance. That information will be made available via this blog, our web site and in correspondence. Stay tuned.