The NRC regularly works with outside experts when we examine technical issues, including earthquake hazards. We’ve just reviewed how the Palo Verde nuclear power plant in Arizona used experts as it re-evaluated its quake hazard. We’re satisfied with the results. 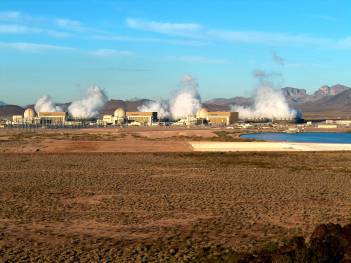 For almost 20 years the agency has used the Senior Seismic Hazard Advisory Committee approach to consider a broad range of information in earthquake hazard analysis. Western U.S. nuclear power plants have followed this method to help meet the NRC’s post-Fukushima effort to re-evaluate their quake hazards. Palo Verde, the Columbia power plant in Washington and the Diablo Canyon power plant in California each used a detailed SSHAC process to better understand where quakes could occur and how quake energy causes the ground to move at their site.

Different kinds of uncertainty make earthquake analysis difficult. Quakes are random in many ways, and quake science is incomplete. The SSHAC approach is valuable because it effectively includes both types of uncertainty in the analysis.

Palo Verde started the process with a series of expert workshops in 2013 and 2014. The workshops identified and gathered the best available information, and then moved on to discuss how best to analyze that data. NRC staff observed the workshops and reviewed the written results of this work, concluding the plant correctly used the SSHAC process.

The plant examined historic quakes out to about 250 miles from the site, including large quakes in southern California and northern Mexico. Both Palo Verde’s effort and the NRC staff’s independent analysis found about 900 quakes to consider. While the plant later found it used some incorrect values in examining those quakes, additional plant analysis and independent NRC calculations found the correct values slightly decreased the site’s quake hazard.

All of this leads the agency to conclude Palo Verde developed an appropriate model for quake sources around the site.

The plant also reviewed U.S. and international databases and numerical models of ground motions in areas similar to Arizona. Palo Verde’s effort also considered how nearby California and Mexico quakes could affect the site’s ground motion. From there, the plant calculated likely quake hazards of different strengths and the resulting ground motions at the site. As with the other parts of the re-evaluation, the NRC staff did independent calculations and concluded the plant’s approach was appropriate.