My aim in this post is to explore with you the meaning and implications of the first of the NRC’s Principles of Good Regulation: “independence.” At a glance, this might seem a simple task. “Independence” is one of those concepts like “justice” or “liberty” — we know what it is, we know what it looks and feels like; however, we have trouble, if asked, to precisely define it.

Of the multiple definitions offered by Merriam-Webster, two seem the most relevant: (1) “not subject to control by others” and (2) “not requiring or relying on something else.”

If that was all that was meant by “independence,” then its inclusion amongst the NRC’s other principles could be seen as a re-articulation–for emphasis maybe–of a prior-standing principle already applicable to all employees of the Executive Branch. Principle 8 of the General Principles of Ethical Behavior states, “Employees shall act impartially and not give preferential treatment to any private organization or individual.”

Undoubtedly, when the NRC authors included independence (also dubbed independent in some versions of the principles) as one of the NRC’s principles they intended something more than not being subject to the control of others. As stated by Dr. Gail H Marcus, who was Commissioner Kenneth Rogers’ technical assistant tasked with developing the NRC Principles, “We wanted to dispel the idea that an independent person should work in a vacuum. Rather, an independent person should interact with all factions, should collect all facts, and should understand all viewpoints in order to form an opinion that would stand up to critique and review.”

It is one thing to say what independence is. It is wholly another to say how one should go about being independent in particular circumstances. This presents an essential paradox. We must not separate ourselves, but rather to engage with all those who have a stake in the work of the agency. 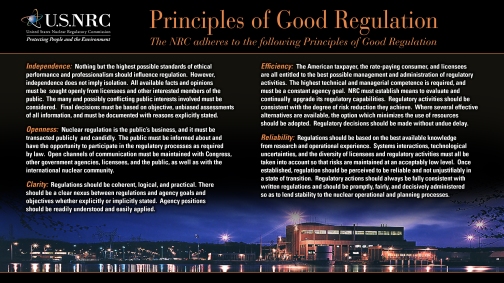 To meet its charge of independence, the NRC must ever be proactively attuned to the views of licensees, state and local governments, and the interested public, all the while maintaining some necessary degree of separation to preserve our objectivity.

“Independence,” in the context of the NRC’s principles, thus does not mean simply “self-reliant isolation,” but rather something more akin to “impartial engagement.” And therein lies the rub. So long as the NRC is faced with a plurality of conflicting public views and interests–an ever-present fact of life at the NRC–impartial engagement is a complicated balancing act, a never-ending tightrope walk.

NRC employees negotiate with this paradox every day. Consider the following example:

Each year, in the late spring and early summer, the NRC conducts public annual assessment meetings for each of the reactor licensees. Some of these meetings are heavily attended–so much so that often there are far more members of the public who wish to speak than the allotted meeting time would permit. As a facilitator for those meetings, I must devise the public speaking order, knowing that this decision will determine who will get to speak at the meeting and who will likely not. As illustrated by the dialogue that follows, I have struggled with how to achieve an impartial balance that fully and fairly provides an opportunity for the conflicting views at those meetings to be voiced.

One option is to choose the speaking order by lottery. Picking names out of a box would be an impartial solution. But is that fair to those who arrived early to secure themselves a place in the speaking order?

Another option is to have one sign-up list at the registration table, and we’ll call people in chronological order. First come, first served. But couldn’t that lead to some people queuing up hours in advance? Will the meeting space allow that? And what if those arriving early are members of one group? Don’t we have a responsibility to make sure that we hear from a variety of viewpoints?

Perhaps we should have two sign-up lists: one for those for and one for those against? How about adding a “neutral” sign-up list? That may solve some issues, but could present more. What happens if everyone just signs up on the neutral list, which would usually be the shortest?

We weigh these options, and sometimes others. Any time we seek input into our decisions, we face this struggle to maintain impartial and balanced engagement with a plurality of stakeholders with conflicting views. It’s a balance we have to strike, and inevitably, we won’t please everyone. However, it is a task that NRC employees must fully embrace if the agency is to live true to the vision of independence ensconced in its principles.

This post is the first of five that will explore each of the five principles separately. For the history of the Principles of Good Regulation, read this post.