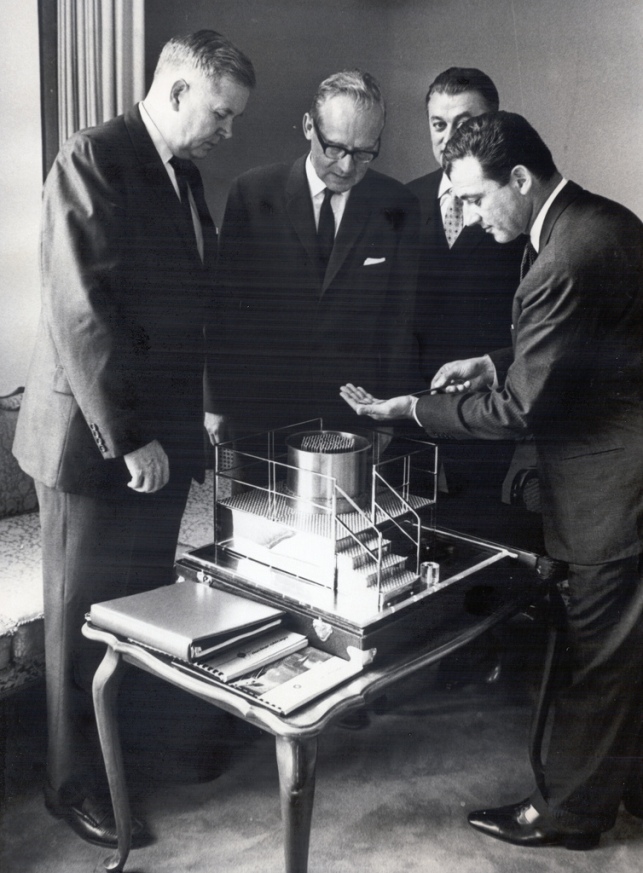 A Commissioner from the Atomic Energy Commission (NRC’s predecessor agency) is seen here standing with a model of an inexpensive sub-critical assembly unit showing detailed technical information on its design, fabrication and operating characteristics. The presentation ceremony of the model took place in 1964 at the International Atomic Energy Agency in Vienna, Austria.

Can anyone name the AEC Commissioner? Hint: he is on the far left. Bonus points if you can name the IAEA Director General next to him.

One of the earliest proposals to meet “the promise of the peaceful atom” was a small research reactor so simple and inexpensive that universities could buy one for scholars and students. That was the plan back in April 1948.

The Atomic Energy Commission (the NRC’s predecessor agency) touted research reactors as a peaceful counterpoint to nuclear weapons. The AEC thought research reactors could jump-start a civilian industry at home and cultivate allies abroad. And in large measure, it worked. As the nation’s first civilian owned reactors, they broke down military secrecy and demonstrated the atom’s peaceful potential for education, medicine, research, and industry.

The first of a series of videos outlining this promise and the unique safety challenges of research reactors went live today on the NRC’s YouTube channel.

The video starts its journey with North Carolina State College’s first civilian-owned reactor — part of its new program in nuclear engineering. Then, two years later, Oak Ridge’ research reactor made a debut in Geneva, Switzerland, in 1955. It was an inexpensive “swimming pool” reactor unveiled at the world’s first international conference on the peaceful uses of nuclear energy. Over 60,000 people, including prime ministers, royalty, and presidents, lined up to peered down into the blue glow of the future.

As the video points out, dozens of universities and corporations followed with their own research reactors. They were small, safe, and used only a small amount of uranium fuel compared to nuclear power plants. For only a small investment, researchers could open up the secrets of the atom and produce isotopes critical to medicine and industrial uses. Ultimately, these research reactors led to the innovative idea of testing the age of ancient pottery

Worldwide more than 670 research reactors were built in 55 countries with 227 in the United States alone.

We hope you’ll take the time to watch the video. And look for the next one coming soon, focusing on key challenges in ensuring safety, preventing diversion of  fuel for weapons, and preserving the benefits of research reactors even as their numbers have declined.