Copper is a valuable metal that, increasingly in recent years, has been the target of thieves hoping to pocket some quick cash by selling it to scrapyards. 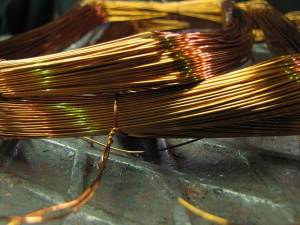 Piping made with the material has been stolen from unoccupied homes and businesses. Copper downspouts have been snatched from churches. Even cemeteries have not been immune, as copper flag holders placed at the graves of veterans have been plundered. Cable-TV network CNBC reported in 2013 that copper thefts were ‘like an epidemic’ sweeping the nation.

Unfortunately, the energy sector has not been immune. In early January of this year, the Orlando Sentinel reported that thieves in central Florida had made off with about 42 miles of copper wire.

Non-radioactive copper wire also has been stolen from or close to switchyards located near several U.S. nuclear power plants. (No thefts from the “Protected Area,” or high-security, zone at the plants have occurred, and robust security measures help ensure that should continue to be the case.)

Some examples of the metal pilfering:

Between security patrols and other NRC-required measures, U.S. nuclear power plants are among the most fortified parts of the energy infrastructure while switchyards have not been, generally speaking, subject to the same level of security attention. That said, the good news is the utilities that own and operate the switchyards have been taking steps to deter future thefts.

For instance, Con Edison, based in New York, announced last year that it had begun using markings on copper wire only visible under ultraviolet light, making it easier to track where the material originated and thereby identify theft suspects.

Also, Pennsylvania-headquartered PPL, which operates the Susquehanna nuclear power plant, said it was bolstering security measures at substations and notifying scrapyard owners to be on the lookout for large quantities of copper wire that could have been taken from switchyards. Further, FirstEnergy and Ohio Edison said last September that they planned to install security fencing and monitoring systems at some of its substations in an effort to deter metal thieves.

As with all issues that surface at U.S. power reactors, the NRC staff is always made aware when theft incidents occur, and the agency’s security and safety experts would engage plant operators on potential implications and preventive actions.

The sudden loss of power from a nearby switchyard could potentially impact the operations of a nuclear power plant, making it a very bad idea. But it’s also illegal and potentially fatal for the thief. As PPL put it when it rolled out its campaign, “Copper – It’s not to die for.”