The hurricane season officially begins next week, and this year hurricane experts are predicting 12-14 named storms in the Atlantic with at least a couple of major hurricanes. After two years of seeing a below average number of storms, some of those experts are saying this could be an unpredictable and potentially dangerous season.

As they do prior to every hurricane season, NRC staff members are preparing for the challenge and will be ready for any storms that make landfall and threaten the facilities we regulate. NRC preparations begin with training for all those staff members who might have to respond during a storm, testing of communications systems, and inspections to confirm that nuclear power plants in hurricane-prone areas have completed their extensive hurricane preparations.

The annual hurricane season runs until Nov. 30, and the NRC staff routinely tracks each storm from formation until dissipation, constantly evaluating whether it could pose a threat to U.S. nuclear plants and other NRC-licensed facilities.

If a storm approaches the mainland, the NRC regional offices provide regular updates to the NRC’s Headquarters Operations Center in Rockville, Md. Depending on the location of the storm, the Region II office in Atlanta, the Region I office outside Philadelphia, or the Region IV office in Arlington, Texas, may be involved. These briefings include information about staffing of the regional Incident Response Centers, assignment of additional staff to supplement the NRC resident inspectors at the potentially affected plants, and actions underway to ensure continuous communications with NRC-licensed facilities along the projected path of the storm.

Before a storm even forms, the NRC’s regional offices make sure that appropriate equipment, including satellite phones, are available and operational.

When a storm does form and its projected path shows possible impact on a coastline, one or more of the regional offices begins continuous hurricane tracking using the resources of the National Oceanic and Atmospheric Administration’s National Hurricane Center, other federal agencies and commercial weather forecasting services.

Within 48 hours of expected hurricane force winds, NRC officials are dispatched to the State Emergency Operations Centers in the affected states. Additional NRC personnel are identified and placed “on-call” to respond if needed for any storm-induced emergency.

About 12 hours before the arrival of hurricane force winds, the agency will begin receiving continuous status updates from all of the NRC-licensed facilities in the hurricane’s path. Communications links will also be established with state emergency response officials and other federal response agencies.

During a storm’s landfall, NRC staff members maintain close contact with the plant staff and with NRC resident inspectors on site. If normal communications are lost, emergency communications systems are used.

Following any hurricane, the NRC inspectors help assess the extent of any damage to the facility and, if necessary, respond to any storm-induced problems. The agency also works closely with the Federal Emergency Management Agency to determine when evacuation routes are passable and offsite emergency response organizations will be sufficiently recovered from the hurricane response to resume normal activities.

We all hope 2016’s hurricane season has little or no effect on NRC-regulated facilities and all other areas where people live, but in any case, our advance preparation allows the NRC staff to respond quickly and effectively if a hurricane or major storm does strike.

In March 1991, the NRC’s Operations Center was located in the Maryland National Bank Building, in Bethesda, Md., even though the first building of the new, soon-to-be consolidated NRC headquarters complex was occupied in Rockville, Md.

In this photo, then-director of the Division of Safety Systems Analysis, Brian Sheron, briefs the Executive Team during an exercise with the St. Lucie nuclear power plant, in Florida.

At the head of the table (lower left) is Commissioner Ken Rogers, who is joined by a number of high-ranking NRC officials from various offices. 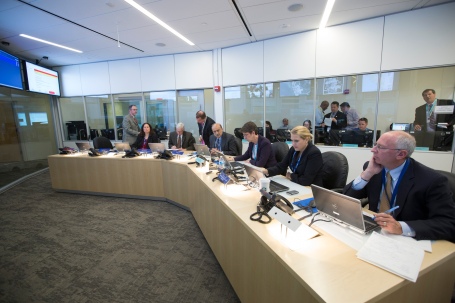 Now, the NRC’s Operations Center is a modern facility using the latest technologies. During this emergency preparedness exercise with the Fermi nuclear power plant, held in April 2014, the Executive Team gets briefings over webcam, while monitoring information on laptops and keeping an eye on the content of simulated social media.

In this exercise, the Executive Team was headed by then-Commissioner George Apostolakis, center, seated.

For more about the NRC’s emergency preparedness activities, visit the agency’s webpage.