Update: Over Labor Day weekend, Hermine had minimal impact on nuclear power plants in its path. The Brunswick plant, in North Carolina, temporarily down powered due to a loss of one offsite power line, but no plants in the southeast were forced to shut down and there was no major damage. Nuclear power plants in the northeast fare similarly. The NRC will continue to keep tabs on the storm’s movements with respect to possible impacts on New England nuclear power plants, but for now it appears they will not experience the kinds of wind speeds that could prompt operators to consider reducing power or shutting down a reactor. Roger Hannah and Neil Sheehan

The NRC joins the rest of the federal government this September — National Preparedness Month — in urging you keep your emergency plans up to date. Your plans should cover natural hazards for your area, including earthquakes, tornadoes and hurricanes. With Tropical Storm Hermine taking aim at the U.S., now is a particularly good time to think preparedness. 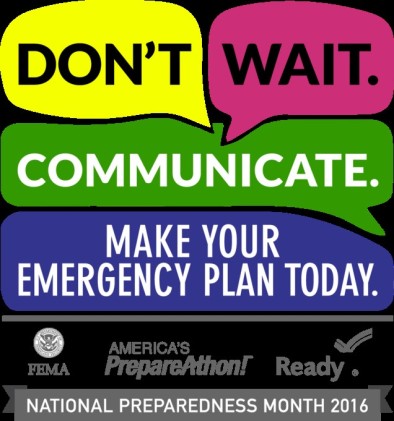 If you live within about 10 miles of a U.S. nuclear power plant, the plant sends you emergency planning information every year. You might get this information in the form of a calendar, brochure or other document. A very important part of these materials discusses how emergency plans cover special groups such as students or people with disabilities. The materials include who to contact ahead of time for any additional help you, a family member or neighbor might need during an emergency. When you share this information with emergency officials, they can also use it during natural events.

The planning materials also include basic information on radiation, instructions for protective actions such as evacuation and sheltering in place, and contacts for additional information. It’s always good to store this information where you can easily find it if needed.

Another key part of your emergency plan is staying informed during an event. The NRC requires every U.S. nuclear power plant to have reliable ways of quickly informing people within 10 miles that something’s happening. This can involve sirens, tone-alert radios (think weather-alert radios), or emergency officials driving through your neighborhood and giving instructions over loudspeakers. A plant’s annual planning information will include the radio or television channels to tune to for Emergency Alert System (EAS) information and instructions during an event.

The NRC examines all of this emergency preparedness work in assessing every U.S. nuclear power plant’s ability to protect the public. Working with the Federal Emergency Management Agency, the NRC grades a plant’s full-scale exercise at least once every two years. These exercises maintain the skills of plant, local, state and NRC emergency responders, as well as identify anything the plants need to improve. NRC inspectors also evaluate additional plant drills.

You can find more general information and tips on creating your family’s emergency plans at Ready.gov . Check out our YouTube video on hurricane preparedness at the NRC here.

Every year, NRC managers and staff members in headquarters and the agency’s four regions participate in nuclear power plant emergency exercises. The plants are required to exercise their plans every other year, and NRC response team members use these exercises to keep their skills sharp and to identify areas for improvement. The exercises provide valuable experience and make each plant’s overall emergency response program better.

State and local responders and the plant staff have a crucial role in each of those exercises, but many federal agencies that would be involved in an actual serious nuclear emergency rarely participate.

In a little more than a week, the NRC, along with state and local officials in South Carolina, Duke Energy, FEMA and the Department of Energy, will stage a full-scale exercise at the Robinson nuclear plant in South Carolina. It’s being called Southern Exposure 2015. This exercise will bring together not only the usual exercise participants, but also many other agencies that would have a role in a real event.

In addition to the NRC, FEMA and DOE, federal agencies participating include the Departments of Agriculture, Health and Human Services, Labor, the Interior, Transportation, Veterans Affairs and the Environmental Protection Agency.

Southern Exposure 2015 will begin on Tuesday, July 21, with activities much like the exercises the NRC regularly sees. On Wednesday, July 22, the NRC will be joined by those other federal agencies in a broad response to the simulated events at the Robinson plant. The NRC and the other federal agencies will work closely with state and local officials and Duke Energy’s plant operators and managers to achieve the objectives of the exercise.

Victor McCree, the Regional Administrator for Region II, will serve as the NRC’s Site Team Director for Southern Exposure 2015, leading the NRC team in South Carolina. The NRC will also support the exercise with staff in the regional office in Atlanta and headquarters in Rockville, Md.

While McCree has participated in countless exercises, he acknowledges this one is unique. It’s a rare opportunity, he said, to work with so many organizations across federal, state and local governments as well as the private sector.

People living and traveling near the Robinson plant during the exercise may hear and see actions associated with the simulated response. These could include response vehicles, field monitoring teams and low-flying aircraft, but the exercise should not affect normal traffic or other activities in the area.

While the likelihood of a severe nuclear accident in this country is low, the Southern Exposure 2015 exercise is designed to allow all the organizations involved, federal, state and local, to address the simulated accident’s effects on the economy, environment and public health – and be better prepared to respond if the events were real.