People are often surprised to learn that regulators in 37 states oversee 87 percent of the radioactive materials users in the United States. 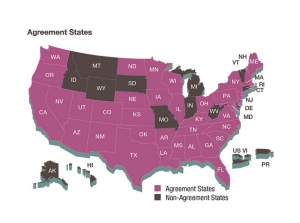 Some people might ask, isn’t that the NRC’s job?

In fact, the NRC oversees all commercial power reactors. But Congress in 1959 gave states a role in regulating nuclear materials. A governor can ask the NRC to enter into an “Agreement” to oversee materials used in medicine, academia, research and commerce. The state must develop regulations, inspection and licensing programs, and hire and train staff. Once we find the state program to be adequate and compatible with the NRC’s, we can relinquish our authority.

But our job does not end there. The NRC plays an important role by overseeing state regulators. We review Agreement State programs, usually every four years (see our earlier blog post on this oversight program). Overall, the Agreement States do a very good job. But from time to time we find issues that need fixing. A management board looks at the review team’s findings and draws a conclusion. The board can find the program:

If the board thinks the issues are more serious, it can recommend probation. A majority of NRC’s five commissioners must approve the recommendation before a state would be put on probation. This week, we announced we have put Georgia on probation. 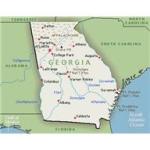 Georgia has been on a monitoring status since 2008. But in an October 2012 review, the review team found the state’s program had declined. They found significant deficiencies that could impact public health and safety if left uncorrected. Earlier this year, a management board recommended probation. Georgia developed a plan for improving its program and has had bimonthly conference calls with NRC staff ever since.

This is the first time the NRC has put a state on probation. In addition to our close scrutiny, we are notifying and coordinating with other government officials. NRC staff will stay in close contact and continue to work with the state on improvements. We will review Georgia’s program again in January 2014. If the state’s plan works, we could decide then to decrease our oversight. If not, we may continue the probation. If we see additional problems, we could suspend or even terminate the program.

This headline appears far too often. While the U.S. food supply is among the safest in the world, there are an estimated 48 million food-borne illnesses here annually, according to the Food and Drug Administration. That translates into one in six Americans falling ill every year. Of those, 128,000 are hospitalized and 3,000 die.

One important tool in the fight against foodborne illnesses may surprise you. Exposing food to radiation can eliminate pathogens—bacteria, viruses and parasites. Much like pasteurizing milk or canning produce, irradiation makes food safer and extends its shelf life.

The FDA has overseen the safe irradiation of food for more than 30 years. Other U.S. and world organizations, including the Centers for Disease Control and Prevention, the U.S. Department of Agriculture, and the World Health Organization, have all agreed that food irradiation is safe. The NRC plays a role too. The NRC licenses, inspects and oversees the operation of commercial irradiators.

It is important to understand that irradiated food does not become radioactive. The nutritional quality is unaffected and the process does not change the taste, texture or appearance of the food. Consumers will know their food has been treated this way only by its label. All irradiated food must have a label that states it has been treated with radiation. The label must also carry the international symbol for irradiation.

For more information on the NRC’s role in licensing and overseeing irradiators, see our newly updated backgrounder on commercial irradiators.