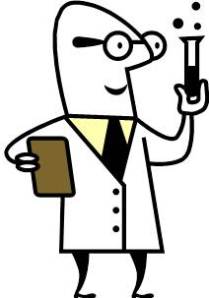 Let’s suppose a scientist is developing a new pesticide for treating crops. In order to understand what happens to that pesticide, the scientist uses tritium to label the compound. The atom of tritium will replace one of the normal hydrogen atoms on that compound. Then the pesticide labeled with the tritium tracer will be applied to a plant in a greenhouse. Samples of the leaves, roots and soil will be collected periodically and tested to see whether there is tritium in the samples.

Then the scientist will know whether the pesticide stays on the leaves, is absorbed into the plant, or gets into the soil from the plant roots or from being washed off the leaves during watering (in a laboratory setting).

By far, the most frequently used radionuclides for research are carbon‑14 (C14), tritium (H3), iodine‑125 (I125), phosphorus‑32 (P32) and sulfur‑35 (S35), which have low enough energies to be easily shielded with thin plastic. I125 emits low-energy gamma radiation which also is easily shielded by plastic or glass.

Only very small quantities of these radionuclides are used, usually measured in microcuries or nanocuries. Because it’s gotten more expensive to use and dispose of radioactive materials, scientists have developed alternate testing methods for many studies. However, some research still requires radioactive materials because they’re the best way to label and trace a compound.

The NRC’s Office of Nuclear Regulatory Research (RES) produces regulatory guides to provide guidance that nuclear utilities can follow to meet NRC rules for the design and operation of their nuclear plants. The NRC staff also use regulatory guides to review applications from the utilities for plant permits and licenses. New guides are developed when needed – and existing ones are regularly reviewed and updated.

The Regulatory Guide Development Branch (part of RES) is very concerned with promoting “knowledge management” within the agency. We have an obligation to preserve key technical information especially as people leave the agency. Therefore, we have taken steps to make sure we capture, preserve, and transfer important technical knowledge.

To do this, we encourage NRC staff members to write their knowledge into regulatory guides as they identify technical and regulatory issues. This helps keep the knowledge in a permanent and long-lasting record. This also helps prevent technical information from becoming difficult to find over time. This is a very important responsibility, especially because of staff retirements or reassignments.

In addition, the NRC staff teams up its junior staff with senior staff to perform the reviews and updates of the regulatory guides. This approach effectively helps pass on regulatory information to the junior staff. It also ensures that this important guidance continues to be available to the NRC staff, its stakeholders, and the public.

Critical knowledge can’t be lost if the NRC is to continue to meet its important mission. We make sure it isn’t.