When the Pilgrim nuclear power plant got a second “white” performance indicator in the same area of performance in 2014 it meant we would ratchet up our level of scrutiny until the underlying issues were resolved.

Starting Monday, that scrutiny will take the form of a team inspection at the Plymouth, Mass., facility. Eight NRC inspectors will begin performing evaluations in several key areas.

For one, they will review the evaluation done by Entergy, the plant’s owner and operator, looking at why the problems that triggered the indicator changes occurred. The team will also dig into the fixes, or corrective actions, put in place by the company to prevent the issues from happening again. They will also look at whether the issues could have affected other parts of plant operations. The timeframe for the inspection gave Pilgrim time to evaluate and fix the problems, so the NRC inspectors can make sure the corrective actions are adequate.

Another area the team will assess will be whether there were any safety culture weaknesses that caused or played a part in the performance issues. The NRC defines nuclear safety culture as values and behaviors that emphasize safety over competing goals to ensure protection of people and the environment.

Once the team’s on-site work is finished, the inspectors will brief Entergy at a high level regarding what it has found. That is followed by an inspection report issued within 45 days.

We also plan to conduct a public meeting with Entergy after the inspection is wrapped up. This meeting, which would likely occur in December or January near the plant, will provide a forum for the NRC and the company to discuss the performance issues, their underlying causes and any improvement steps.

The NRC will provide notice on the date, time and location for this session.

As a refresher on earlier developments, the Pilgrim plant’s performance indicator for Unplanned Scrams (shutdowns) with Complications crossed the threshold from “green” to “white” following the third quarter of 2013. Then, in the fourth quarter of last year, the performance indicator for Unplanned Scrams per 7,000 Hours of Operation also changed to “white,” something that occurs if a plant has more than three such shutdowns during the designated period. This placed Pilgrim in the Degraded Cornerstone Column of the Action Matrix used by the NRC to assess plant performance.

And that, in turn, requires the heightened NRC attention to be paid during the team inspection this week.

October is National Cyber Security Awareness Month and – before we head into November – it’s now a good time to remember the importance of cyber security. Cyber crime threatens our work, personal life, identity and privacy. Here at the NRC, we’re committed to protecting our internal digital assets and information, as well as ensuring that our regulated facilities’ critical digital systems of are well protected. This vigilance supports the NRC’s security and safety missions.

All NRC employees are required to complete annual training on computer security. Some of the concepts we teach our employees are useful for everyone:

The NRC ensures operating power reactor licensees and applicants seeking new licenses implement appropriate protections against cyber threats. Since 2009, the NRC has required each power plant to have a cyber security program in place to protect their computer and communications systems.

The NRC is developing a final rule, 10 CFR part 73.77, “Cyber Security Event Notifications,” which, if approved, will require timely notification of cyber security events. This rule is intended to improve the NRC’s ability to respond to cyber security-related plant events, enable the NRC to more effectively evaluate potential threats, and aid the NRC’s overall situational awareness. 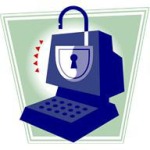 In our Cyber Security Directorate, part of the Office of Nuclear Security and Incident Response, we continue to work with federal partners to protect the United States’ critical infrastructure. The NRC joins the Department of Homeland Security in its interagency and public-private efforts under the Sector Specific Agency Nuclear Sector. And we join with other government regulators on the newly-established Cyber Security Forum for Independent and Executive Branch Regulators, led by Chairman Allison Macfarlane. These partnerships strengthen our mutual knowledge base and provide agencies with an opportunity to share methods and approaches to enhance overall cyber security protection.

During Cyber Security Awareness Month, federal agencies are holding a variety of events to promote the conversation – among employees and the public – on this important topic. One of the most important things for our employees and our stakeholders to realize is the individual computer user is the first line of defense in cyber security.