For the second time in two years, the NRC’s administrative law judges have offered a decision on what role overseas companies can play in building and operating new U.S. nuclear power plants. 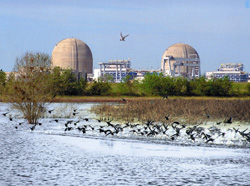 In this most recent case, the Atomic Safety and Licensing Board concluded that Toshiba’s participation in the South Texas Project new reactor project south of Houston is acceptable.

When Congress created the Atomic Energy Act, it included language that prohibits “foreign ownership, control or domination” of nuclear facilities. In an August 2012 decision, the Board examined a company applying for a new reactor at the Calvert Cliffs site in Maryland. That decision concluded the company was 100 percent foreign-owned and therefore ineligible for a reactor construction and operation license.

The NRC has previously approved joint ownership of U.S. reactors where the foreign partner owned more than 10 percent. In the South Texas application, however, the NRC technical staff determined in May 2013 that Toshiba’s overall financial support of the project equaled improper control or domination.

The Board’s decision on the South Texas new reactor application explores some previously uncharted territory. Legal precedent on foreign ownership almost exclusively refers to transferring the licenses of existing reactors. Those license transfers largely have been made in the context of ownership percentage. The Board’s decision applies the terms “control or domination” to the South Texas arrangement.

The Board relied on the NRC’s existing standard review plan to resolve the “control or domination” question. The ultimate decision is based on the South Texas application’s corporate ownership structure and other measures. The Board concluded that those measures meet the review plan’s aim of ensuring U.S. control of safety-related decisions.

Both the NRC staff and the groups opposing the South Texas new reactors have the opportunity to appeal the Board’s decision to the five-member Commission in charge of the NRC. A final decision on the South Texas proposal will take a couple more years due to ongoing technical reviews.