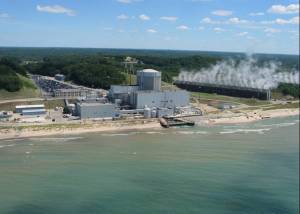 Anticipating the public’s need to understand what’s going on at the Palisades nuclear plant, the NRC held a public meeting in South Haven, Michigan, on February 29, to provide members of the public with a forum to discuss the decline in the plant’s performance and the significant increase in NRC inspections.

More than 100 people showed up to ask questions and express their concerns about the Palisades plant, where the NRC has issued a number of significant enforcement actions in last year. Some in the audience questioned whether the growing number of NRC violations at Palisades suggested the plant was not safe.

Three of the violations found at Palisades had to do with improper maintenance work, which caused pumps, electrical breakers, and other equipment to fail. The equipment failures did not put the public at risk, and NRC required they be fixed. Backup equipment was also available if needed to ensure safety.

Backup equipment is required by NRC and is part of our “defense in depth” safety philosophy. If a safety system or component fails, another one must be available in case of an accident. Of course, the NRC does not wait for accidents to happen: the NRC’s low threshold for identifying safety issues like those at Palisades requires problems to be found and fixed well before the public is endangered.

Although the problems at Palisades have not endangered the public, they do cause concern, and require more stringent NRC oversight. As part of its increased oversight, the NRC will independently evaluate whether there are problems with the safety culture at Palisades, and inspection of Palisades will remain heightened until performance at Palisades improves. If at any time the NRC loses confidence that the plant can be safely operated, it would take action to shut the plant down.

The public will have another opportunity to ask questions about Palisades on March 21 at the upcoming “end of cycle” meeting in South Haven, where NRC will meet with Entergy, the company that operates the plant. Look for details about the meeting to be published online at the NRC’s public meeting website in the near future.