We had a very productive year on our YouTube Channel in 2013. We posted more than 30 videos, including 15 produced in-

house with original content. The latest is a recap of some of the highlights and accomplishments of 2014. 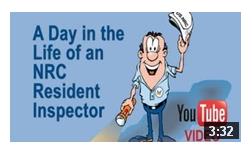 That cartoon, A Day in the Life of an NRC Resident Inspector, made it to our No. 3 spot for all-time video views – quite a feat considering it was just posted in October. Another popular video was our historian’s recount of the Three Mile Island Accident.

Other videos include small segments of important Commission meetings, with links to the full video archive.

We saw a 38 percent increase in our YouTube subscribers and growing interest in the platform. Almost half of our total YouTube views occurred in 2013 even though we debuted the platform back in 2011. Our numbers keep growing and the public continues to watch us.

What’s next? Being mindful of the reduction of resources and budget, there will be a bit fewer videos produced in 2014. But we will be focusing our efforts on the higher interest topics.

Currently in pre-production are two videos we think you’ll find worth watching. One is a conversation about the decommissioning process since five nuclear power plants have announced they are shutting down. And we will be taking a historical look on how the NRC began.

Also, next year we will be featuring more motion graphic videos that will provide quick, lively presentations of NRC information, activities and programs.

What video topics would you like to see? Let us know through your blog comments or email us at opa.resource@nrc.gov .

While “spent fuel pool #4” at Fukushima Daiichi did keep its contents safe during the March 2011 accident, no one could confirm that during the accident. The plant’s staff and other experts, including the NRC, simply didn’t have enough information to know what was going on in the pool. Why not? There was no reliable way to measure the pool’s water level.

Knowing the water level is important because if the pool had boiled dry, it would have damaged the fuel and added to the accident’s radiation release. The Japanese plant’s staff did the right thing in assuming the worst and making many attempts to add water to the pool. They even dropped water from helicopters. If they had known the pools were OK, however, they would have been able to focus on addressing the real problem: the damaged reactors.

U.S. reactors already monitor a small fraction of the water level in the spent fuel pool. However, this system may not work if power is lost, as it was at Fukushima, and can’t provide advance warning of low water levels.

The NRC’s order requires U.S. reactors to be able to tell whether water is at or above certain important levels. The highest level means enough water is available for the normal cooling system to work. The second level marks the level of water needed to protect someone standing next to the pool from the fuel’s radiation. The lowest level is still enough to cover the fuel, but the plant staff should begin adding more water to the pool.

Of course, water may be added—and most likely would be—prior to reaching this point. The order also requires that plant staff must be able to read these levels from somewhere away from the pool, such as in the control room.

U.S. reactors must install the new instruments no later than two refueling cycles after they submit their plan to the NRC or by the end of 2016, whichever comes first. All U.S. plants submitted their instrumentation plans in February 2013. We’ve been reviewing the plans and we recently issued interim staff evaluations. These documents give the plants feedback so they can continue on the right track for implementing the order.

The evaluations also ask plants for additional information we need to complete our review. While the agency’s final approval is yet to come, the interim evaluations give plants the confidence to order equipment and move forward with installing the instruments. We’ll provide the plants a final staff evaluation when we can conclude that they’ll comply with the order by the deadline by following their plan. We’ll continue inspecting plants to confirm they’ve finished complying with the order.

Our website’s Japan Lessons Learned section has a page with more information about the order and related guidance.