In January 1955, Newsweek reported, “It is the envy of thousands of scientists and hundreds of college presidents. It has made Raleigh, North Carolina’s capital, an atomic mecca, attracting such disparate types as President Celal Beyar of Turkey, a band of junketing North Carolina peanut growers, some German school teachers, as well as a procession of industrialists from all over the world.” 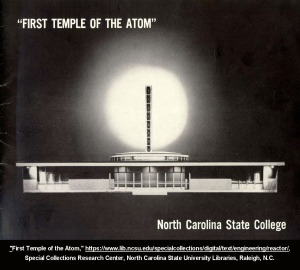 Proposed by NC State in 1950, the reactor was an audacious idea when the most basic information about the fission process was a Cold-War secret. Industry and universities were unwilling to pursue civilian applications of nuclear energy that required expensive security clearances.

Where others saw obstacles, Clifford Beck spied an opportunity. A physicist at NC State, Beck proposed to the Atomic Energy Commission the nation’s first nuclear engineering program built around a declassified reactor.

His timing was perfect. The announcement in September 1949 that the Soviet Union had exploded an atomic bomb tipped the debate within the AEC toward those who favored declassifying atomic secrets. Former AEC Chairman David Lilienthal called on the AEC to “free the atom” for U.S. industrial use.

AEC officials were elated with Beck’s proposal since it provided them with a concrete reason to declassify reactor information. They assured him they were “practically unanimous” that it would be approved. In late 1950, the AEC made public for the first time information on fission research and small research reactors, including the NC State reactor.

Taking advantage of its status as the world’s only public reactor, NC State included a viewing auditorium with thick water-shielded windows so the public could see nuclear energy was, as Beck claimed, “just another type of tool, not something mysterious and super-secret.” In the first year of operation, the reactor had more than 6,000 visitors who came to see a reactor that was “guarded by nothing more than a physics student with a guest book.” One intrigued journalist dubbed it “The First Temple of the Atom.”

Ending secrecy cleared only the first hurdle for NC State. The AEC had to confront difficult safety and security questions.

In 1950, the 1946 Atomic Energy Act strictly limited uses of fissionable material. How could the agency provide bomb-grade fuel to a civilian reactor? How could it prevent sabotage of an unguarded reactor? How could the AEC ensure safe operation on a densely populated college campus? And who in the AEC should approve the reactor?  In answering these questions, the agency foreshadowed many of the later practices it followed in licensing nuclear power reactors. We will turn to that story on Wednesday.

6 thoughts on “Part I — The First Temple of the Atom: The AEC and the North Carolina State Research Reactor”