While the NRC always considered itself a principled regulator, it was not until Jan. 17, 1991, that the agency developed written principles that encouraged regulatory excellence and addressed inadequate performance.

Those principles – five traits of what a good regulator should be – were authored by then-NRC Commissioner Kenneth Rogers. Today, they form the basis of regulatory regimes throughout the world.

To celebrate the anniversary of the NRC’s principles, we’ve produced a video focusing on the historical evolution and application of the principles. Next month 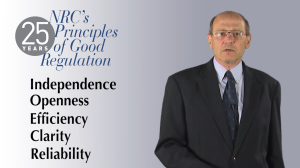 , we’ll post another video looking at how NRC staff view the principles today.

It’s important to consider the well from which the principles sprang some 25 years ago.

In the 1960s, critics attacked federal agencies responsible for environmental and safety regulations for being too secretive and too friendly to the industries they regulated. The NRC’s predecessor, the Atomic Energy Commission, was stung by accusations that it promoted nuclear power rather than protected public safety.

The Energy Reorganization Act of 1974 split the AEC, and consolidated the licensing and related regulatory functions into the newly created NRC, an independent regulator.

But the NRC, too, soon came under fire for its vague, complex and inefficient regulation. The NRC responded by establishing more flexible regulations and clearly defined safety goals.

By 1989, when Rogers first proposed the principles, the NRC was seeking to balance its independence with demands that it be an open, efficient, clear and reliable regulator. Rogers argued that the staff should have consistent guideposts in changing times to remind them of the proven elements of good regulation. Two years later, the Commission agreed, and the principles-of-good-regulation-announcement-january-17-1991 became part of the agency culture.

Many years later, in 2011, President Obama signed an executive order calling for principles of regulation for all federal agencies. 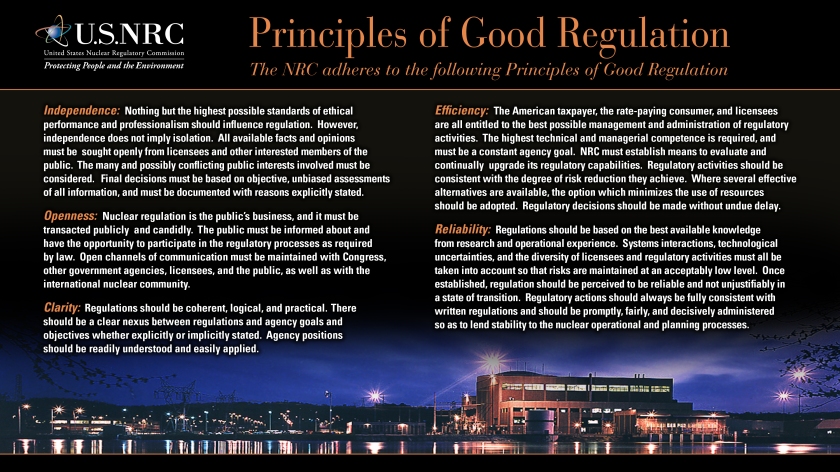 Seemingly timeless, each principle was really a specific lesson drawn from regulatory experience.

Over the years, the principles spurred continuous improvement at the NRC – among other actions, they helped the agency formulate its budgets and prioritize safety improvements in the aftermath of the accident at Fukushima Daiichi.

Stakeholders also use the principles to hold the agency accountable. They have been valuable reference points for agency critics when they believe the NRC has not measured up to its own standards of excellence.

Even after 25 years, with the changes within and external to the NRC, these Principles of Good Regulation remain the agency’s calling card abroad and touchstones of excellence at home.